I’ve always liked the Craig Anderton Tube Sound Fuzz / Way Huge Red Llama. It sounds equally good on bass, without a clean blend, as it does on guitar. But what to do with those four extra, unused inverters in the CD4049?

Well, I recently stumbled on a schematic of the Way Huge Fat Sandwich online. I don’t know if the schematic was correct, had any errors or not. But, what I took away from it was how the CD4049 inverters were stacked in parallel, in two groups of three, within the basic Tube Sound Fuzz configuration.

So, that’s what the Tube Steak is about – no unused inverters in a TSF/Llama fuzz. Well, that and the really cool internally illuminated enclosure that I made for it.

And here’s a PCB layout: 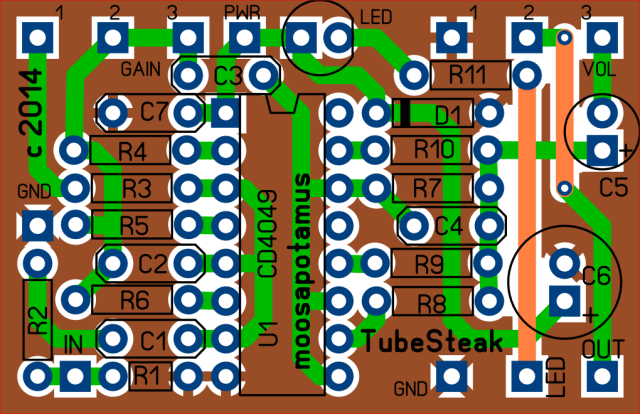 The PCB layout is double-sided, but there are only two traces on the top layer and they can be eliminated pretty easily if necessary.

Finally, here’s a little table of which components to change to what value to get work-alike versions of a couple different CD4049 fuzz circuits: