I’ve been tinkering around with this circuit on my breadboard. It’s the Fuzz Unit from Music Projects by R.A. Penfold, 1994. 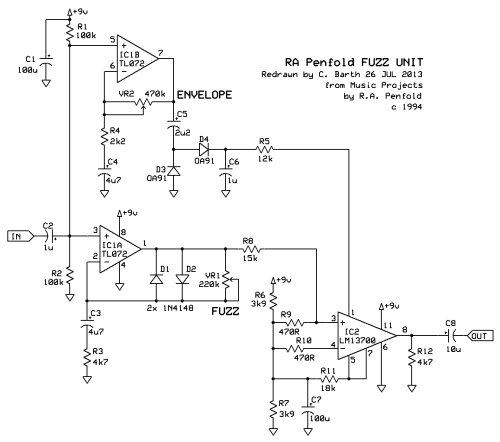 As a bass or guitar effect, the fuzz circuit on it’s own does a poor job of reproducing the attack and decay dynamics that would normally result when a musician varies the way they hit the strings (playing harder or softer) because of the compression created by the clipping diodes in the fuzz circuit.

But, when fed through the VCA controlled by the parallel gain stage, the VCA tracks the player’s dynamics and, as a result, the output volume of the fuzz follows the original attack and decay characteristics of whatever instrument is connected to the input.

What does that sound like? Here is a video demo…

My initial impression is that this circuit performs pretty much as promised. It also seems to work quite nicely as a noise gate.

The VCA is based on the LM13700, and is not simply lifted from the LM13700 datasheet. The VCA does seem to add some filtering to whatever is fed through it. For example, if you watched and listened to the above video, you might notice that the fuzz sounds a little different going through the VCA compared to when the VCA is bypassed.

At any rate, I think it’s an interesting circuit that could have some cool applications other than what was originally intended.